Crude Oil Price Goes Back and Forth

This is a very neutral market, so unless you have the ability to trade short-term charts with a sideways tilt, you’re probably better off leaving it alone.

The West Texas Intermediate Crude Oil market has gone back and forth during the trading session on Thursday, as we continue to try to figure out whether or not we have the demand for crude oil to lift price, and it’s also worth noting that we had tested the $100 level. The $100 level has been crucial, so because of that I think that quite a bit of noisy behavior to say the least.

The 200 Day EMA sits just below, and it does look as if it is trying to be a bit of support. At this point, the market is likely to continue to see back-and-forth action, trying to figure out where we are going next. Ultimately, this is a market that looks to be a bit confused, as we have to worry about whether or not there’s going to be enough demand, and of course supply issues have been a major problem as well. Further adding more noise into this market is the fact that the US dollar will have its influence also, so all of this being the case, I think you’re going to continue to see volatility pickup more than anything else.

If we were to break above the $100 level, then it’s possible that we could go to the $104 level. After that, then the previous uptrend line would be the next major resistance barrier, especially as the 50 Day EMA sits just above there. Taking all of that out is a very bullish sign, then it’s likely that we could go much higher. Ultimately, it’s likely that we will continue to see a lot of volatility to say the least, even if we were to take off in one direction.

Breaking down below the 200 Day EMA opens up the possibility of a move down to the $90 level, which was a major support level previously. If we can break down below the $90 level, then it opens up a trapdoor of negativity. Because of this, the market is likely to continue to see that area as important, so I think a lot of clients and CTA accounts would have to close out if we break through that region. As things stand right now, this is a very neutral market, so unless you have the ability to trade short-term charts with a sideways tilt, you’re probably better off leaving it alone. 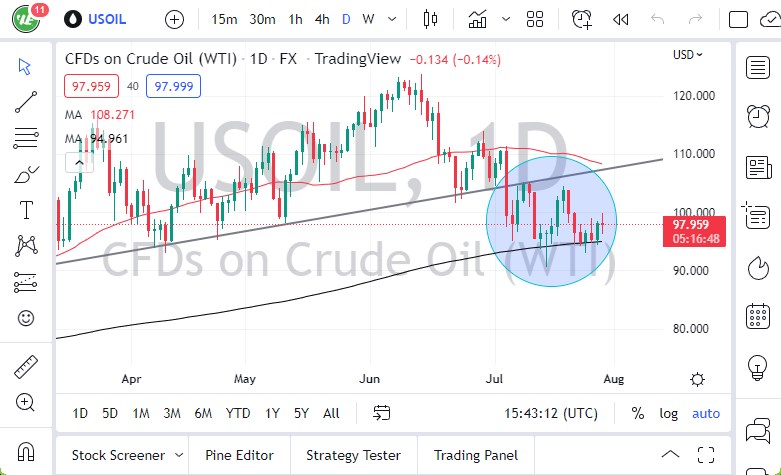 Ready to trade the WTI/USD exchange rate? Here’s a list of some of the best Oil trading platforms to check out.

Real rate charts higher trough, this is bullish for the USDOLLAR