Dollar is Ready to Plunge

I suspect that they probably will, and I think a lot of traders out there are starting to finally get that through their thick skulls as well.

The fact that the sellers have become so resilient tells me that we are more likely than not going to see the Australian dollar completely fall apart. I think the traders are starting to brace for the idea of an extraordinarily hawkish Federal Reserve and a massive amount of pressure due to very strong language. After all, people already know that the Federal Reserve is going to raise rates, but now they are going to question whether the Federal Reserve is going to give guidance going forward that they are in fact going to continue to be aggressive. I suspect that they probably will, and I think a lot of traders out there are starting to finally get that through their thick skulls as well.

Market Expected to Break Down

Rallies now should be nice selling opportunities, because quite frankly there’s no reason to think that the attitude will change. There might be the possible recovery because some people might be worried about a 100-basis point rate hike, and that “just 75” would be something that they would celebrate, but that’s foolish behavior that will get sold into rather rapidly.

Because of this, I suspect that we are going to eventually get down to the 0.65 level, and it may come quicker than we anticipate if Jerome Powell does in fact spook the market. I think he’s going to be like a battering ram during the statement, so I have almost no scenario in which I would consider going long. The one thing that could change my mind would be if he flat out admitted that they were going to change their monetary policy. That is, it very unlikely in this world, so I continue to look at this as a market that’s in the process of getting ready to break down drastically. 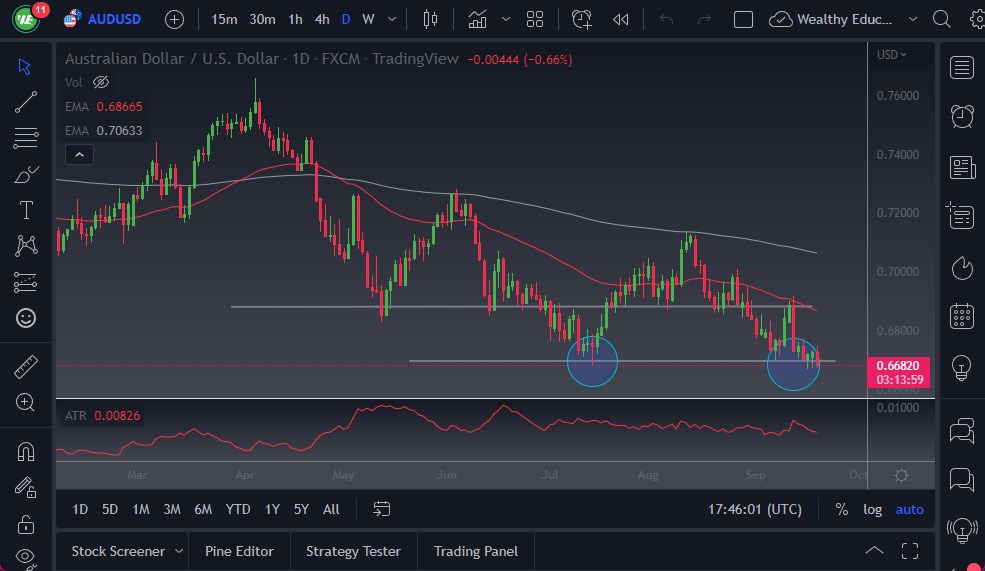 Ready to trade our Forex trading predictions? Here are some excellent Forex brokers to choose from.