Technically, one focus is on whether USD/JPY would break through 135.57 minor resistance to resume the rebound from 130.38. If happens, such move could be accompanied by break of 138.38 minor resistance in EUR/JPY and 163.91 minor resistance in GBP/JPY. Such development might come in tandem with stronger rally in US stocks and benchmark yields.

Eurozone ZEW Economic Sentiment dropped from -51.1 to -54.9, below expectation of -52.0. Current Situation Index rose 2.5 pts to -42.0. Eurozone inflation expectations rose 2.1 pts to -23.5, indicating a reduction of the high inflation rates within the next six months.

“The ZEW Economic Expectations decrease again slightly in August after a sharp drop in the previous month. The financial market experts therefore expect a further decline in the already weak economic growth in Germany. The still high inflation rates and the expected additional costs for heating and energy lead to a decrease in profit expectations for the private consumption sector. In contrast, the expectations for the financial sector are improving due to the supposed further increase in short-term interest rates”,  comments Michael Schröder, researcher at ZEW and head of the ZEW financial market survey, on current results.

In the minutes of the August 2 meeting, RBA expects to “take further steps in the process of normalizing monetary conditions over the months ahead”. However, it is “not on a pre-set path.” The path is a “narrow one” and “subject to considerable uncertainty”. The size of timing of future rate hikes will be guided by incoming data and the assessment of the outlook for inflation and labor market, including the risks.

RBA said that inflation is expected to “peak later in 2022”, then decline to top of 2-3% target range by the end of 2024. The expected moderation reflected “the ongoing resolution of global supply-side problems, the stabilization of commodity prices and the impact of rising interest rates in Australia and overseas”. Medium-term inflation expectation remained “well anchored”.

The Australian economy was “growing strongly” with resilient consumer spending and positive investment outlook. National income was boosted by rise in terms of trade to record high”. Outlook is expected to “remain strong” for the rest of 2022, then slow in 2023 and 2024. Employment was “growing strongly” and further declines in unemployment rate were expected over the months ahead. 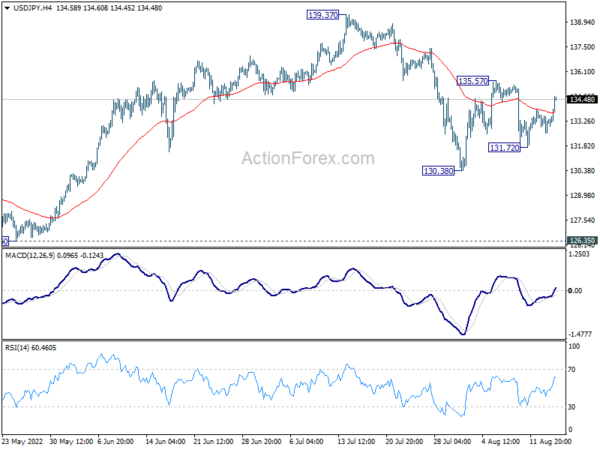 In the bigger picture, fall from 139.37 medium term top is seen as correcting whole up trend from 101.18 (2020 low). While deeper decline cannot be ruled out, outlook will stays bullish as long as 55 week EMA (now at 122.70) holds. Long term up trend is expected to resume through 139.37 at a later stage, after the correction finishes. 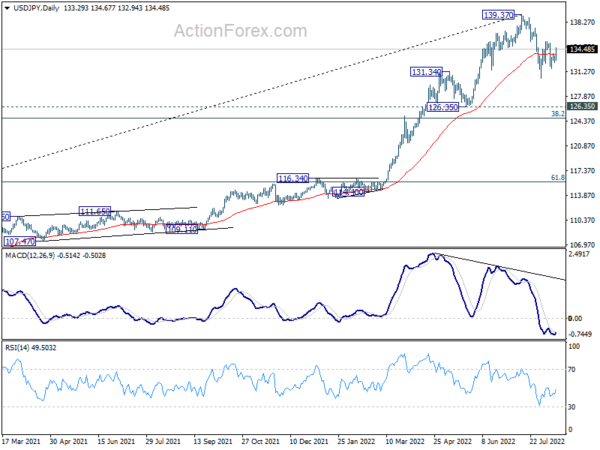 Focus is on bringing down costs and Federal deficit – CNN