The difference between success and failure in Forex / CFD trading is very likely to depend mostly upon which assets you choose to trade each week and in which direction, and not on the exact methods you might use to determine trade entries and exits.

So, when starting the week, it is a good idea to look at the big picture of what is developing in the market as a whole, and how such developments and affected by macro fundamentals, technical factors, and market sentiment. Read on to get my weekly analysis below.

There are a few strong trends in the markets, and following them might help put the odds in your favor, so it is an interesting time to be trading.

I wrote in my previous piece last week that the best trades for the week were likely to be:

The news remains dominated by the Russian invasion of Ukraine, which is well into its third month, but seems to have become stalemated by an effective, NATO-armed Ukrainian defense. Russian forces have withdrawn from the northern part of the company, switching focus to an offensive aimed at fully capturing the eastern and southern coastal regions of Ukraine. The war initially caused quite strong movements in some markets, especially in some agricultural commodities such as Wheat and Corn, but now seems to be having a primary effect of depressing some European currencies and global stock markets, possibly because the Russian government continues to make oblique nuclear threats. Of course, there are other fundamental factors weighing on stock markets, such as the specter of stagflation, and rising interest rates. It should be noted that Wheat is rising strongly again, and this is due partially to the pressure on the crop from the war in Ukraine.

The general risk-off sentiment, although it faded towards the end of last week, is being driven by several fundamental and sentimental factors:

We are currently seeing a small recovery in stock markets, especially towards the end of last week, although the S&P 500 Index closed a bit lower over the week. It is worth noting that the S&P 500 fell well below 4,000 and came very close to reaching a 20% decline from its all-time high, which would have indicated a confirmed bear market if reached.

The strongest trends over the past week were seen in the Forex markets, with the Japanese Yen and US Dollar strong – the Dollar Index made another 2-year high – but the Yen was the strongest currency over the week, attracting money flow as a safe-haven. The British Pound, Swiss Franc, and Australian/New Zealand/Canadian Dollars all reached long-term lows against the greenback. The Swiss Franc is making the longest-term low of all these currencies after reaching parity with the US Dollar, with this price not seen for almost 3 years. The British Pound was hit hard the week before last when the Bank of England forecast that British inflation will peak later this year above 10%.

Commodity markets have lost their buoyancy and are mostly declining or consolidating.

Cryptocurrency is attracting quite a lot of attention, as there have been spectacular declines in many coins, while Bitcoin has broken down below crucial support in the $30k area to trade at new long-term lows. Last week saw stablecoins come under immense pressure putting the crypto sector’s “banking” infrastructure under severe strain. Short trades in cryptocurrencies will continue to attract speculators in this environment, while margin calls will force retail liquidations.

There is increasing hope that as rates of coronavirus infection globally fall for the eighth consecutive week, the pandemic may effectively be almost over. The only significant growths in new confirmed coronavirus cases overall right now are happening in Panama, South Africa, and Taiwan.

The coming week in the markets is likely to be less volatile as there are few releases of high importance scheduled. They are, in order of likely importance:

The weekly price chart below shows the U.S. Dollar Index rose again last week, in line with the long-term bullish trend, printing a bullish candlestick that closed within the top half of its range, but showed a significant upper wick. This was again the highest weekly close seen since March 2020. Dollar bulls will be encouraged that momentum trading continues, and the price has continued to advance to new highs. However, the pace of the increase has continued to slow down, which hints that the bullish momentum may be declining.

Despite the seeming decline in bullish momentum, it will probably be wise to take trades in favor of the US Dollar in the Forex market over the coming week.

The greenback is the second strongest major currency right now, after the Japanese Yen. 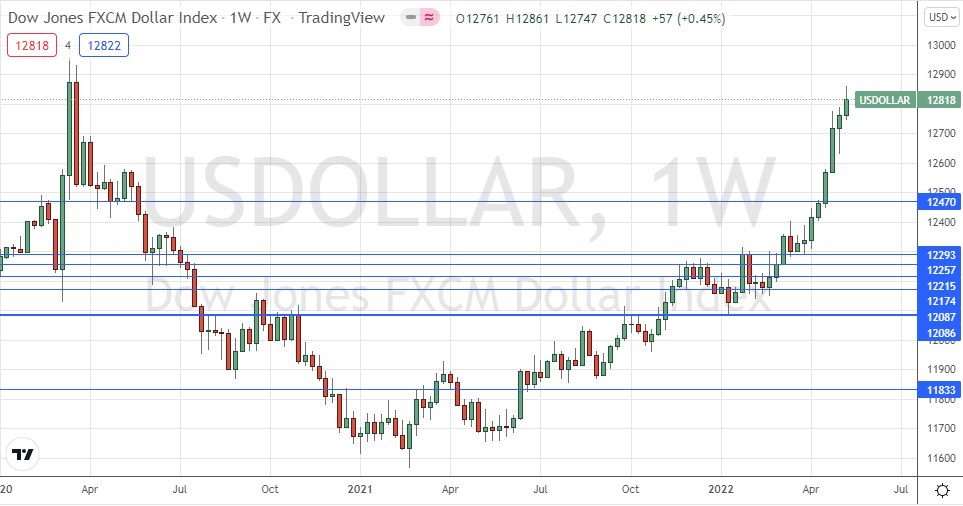 The world’s most important stock market index, the S&P 500 Index, fell again last week, after having traded very close to a 20% drop from its all-time high, and again made its lowest weekly closing price seen in the past year. However, the weekly candlestick in the price chart below is arguably a bullish pin bar, showing the price rebounded strongly later in the week. There is certainly a long-term bearish trend, but traders looking to go short here will probably do best to wait for a bearish turn on shorter time frames.

Trading major stock market indices short is a difficult challenge, but experienced traders might want to be looking for short trades here. 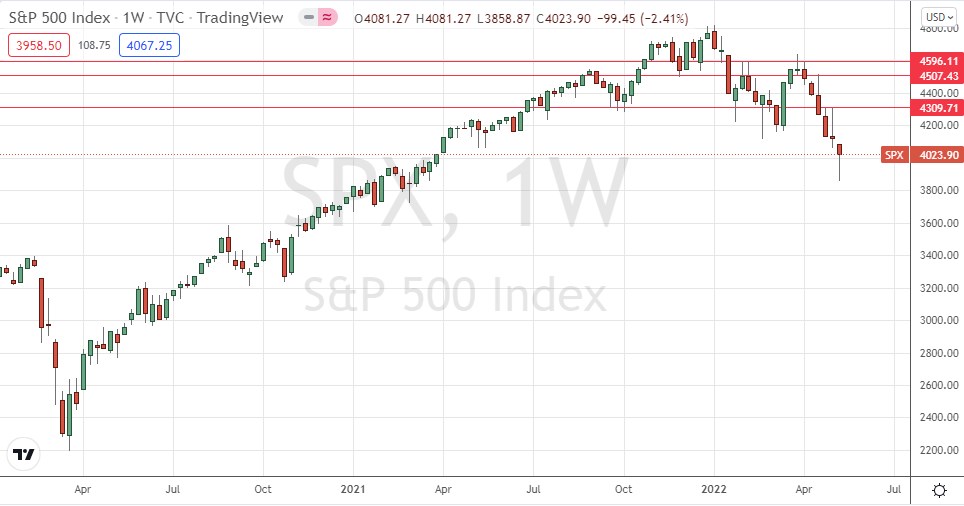 The Euro fell quite firmly last week to reach a new 5-year low against the US Dollar. The low of the week was only a few pips higher than the 19-year low. European currencies are generally weak, and the Euro is of course the major European currency.

We see a bit of a lower wick in the weekly candlestick, and of course there is likely to be support kicking in if the price reaches the 6-year low at about $1.0335.

With a still-strong US Dollar, the price here looks likely to fall further over the coming days. However, bears will ideally want to see a down day on Monday, with a New York close below $1.0378 before entering a new short trade. 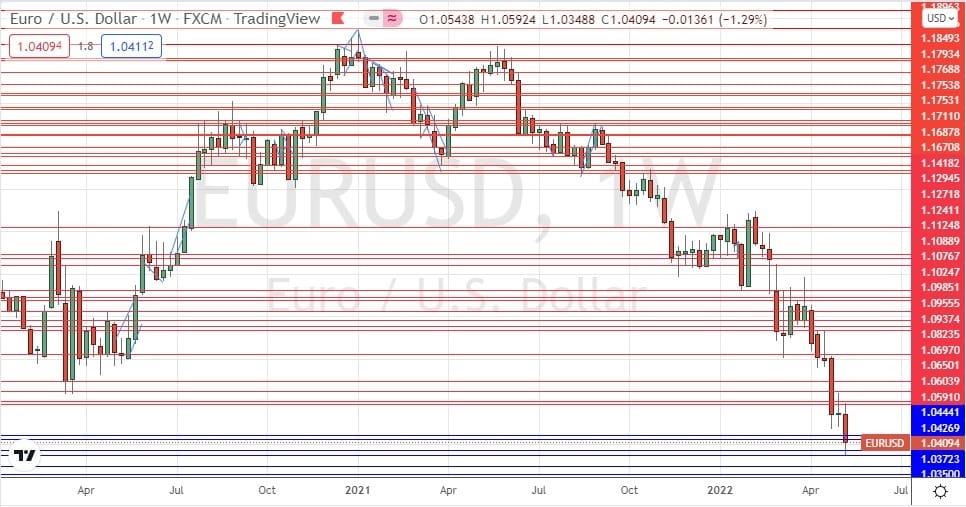 The Swiss Franc fell strongly last week to reach very close to a new 3-year low against the US Dollar, and to reach and surpass parity with it. European currencies excepting the Euro are generally weak, but the Franc is showing standout weakness.

The fall in the Swiss Franc has been unusually strong, being a firmer directional trend over the past few weeks than any other currency excepting the US Dollar. This is unusual as the Swiss Franc rarely trends strongly.

With a still-strong US Dollar, and non-USD currencies (especially European currencies) looking weak, the price may rise further over the short-term. However, bulls should beware of two factors:

I will not take this trend trade, but it may be attractive to other speculators. 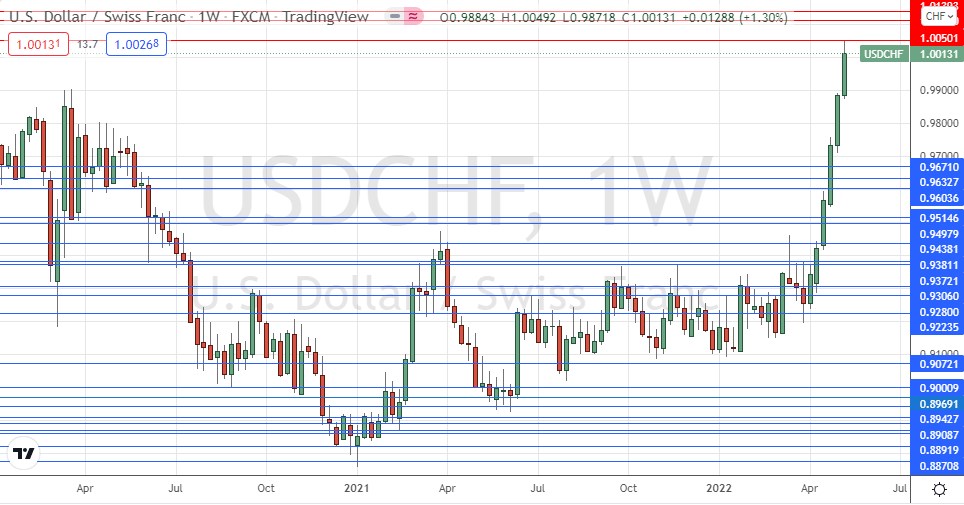 Bitcoin dropped last week in line with its long-term bearish trend. The week ended with a close at a 16-month low.

These are bearish signs, and there is some panic in the crypto sector due to the ongoing collapse of certain stablecoins such as Luna/Terra. This helps the case for a short trade.

However, crucially, there was no daily close below the very pivotal support level at $28,800 – the price somehow keeps refusing to spend very long below that level, although the price has traded meaningfully lower.

Bitcoin is poised on the edge of an abyss, but we may see a long-term bullish rebound from this area. The key indicator will be whether we get a daily close below this very pivotal point at $28,800.

I will be happy to take a short trade once we get a daily closer lower than that level. 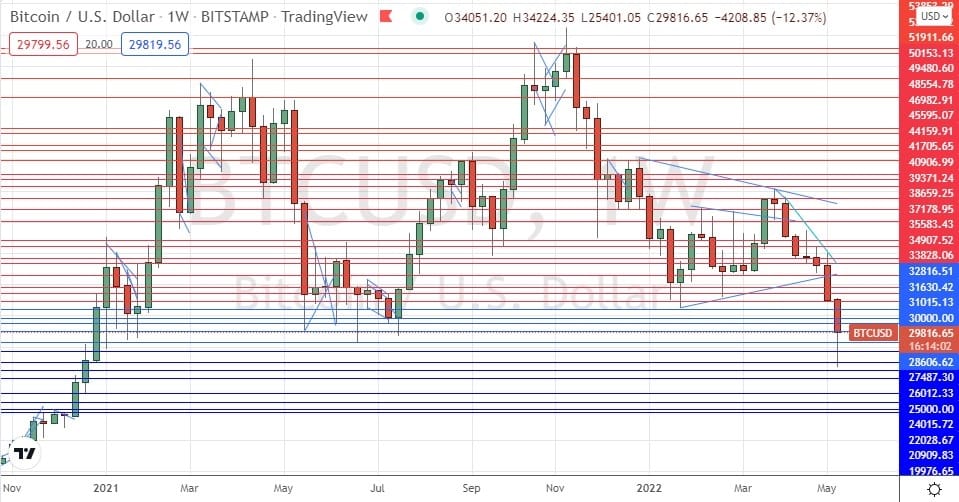 I see the best opportunities in the financial markets this week as likely to be:

Traders – in Asia especially – may also find it interesting to short the NZD against the JPY, or the USD.

The Infuriating Patchwork of Crypto Regulations Is Good for Crypto