GBP/USD Forecast: Continues to pull back

The market breaking above all of that would be a very bullish sign, but I think it’s also very unlikely to happen.

Looking at this chart, you can see just how negative it’s been over the last couple of days and just how overdone it had gotten to the upside. The 50-Day EMA is hanging around the 1.15 level, so I think now it does make quite a bit of sense that we would see negativity in that area. The market breaking above all of that would be a very bullish sign, but I think it’s also very unlikely to happen. We have the Non-Farm Payroll announcement coming out on Friday, which will have a major influence on the US dollar.

As far as the British pound is concerned, we already know what a mess the United Kingdom is going to be this winter. There really is not much of a question as to how that’s going to play out. Most people now are trying to figure out how the Federal Reserve is going to behave, and therefore this is more about the US dollar. Pay close attention to the interest rates in the United States, because if they start to spike again, it’s likely that this pair will drop rather drastically.

Based on the technical analysis, I think that we are going to test the lows again, although I look at this as a situation where I am more than willing to fade short-term rallies showing signs of hesitation. In fact, I don’t really have a scenario in which I’m willing to buy this pair until the Federal Reserve explicitly pivots. Yes, Wall Street will occasionally try to convince itself that the monetary policy is about to change, but the reality of course is much different. I believe at this point we are going to eventually test those lows again, and perhaps even drop all the way down to the parity level over the next several months. A lack of energy and of course an impending recession in the UK will not help the pound by any stretch of the imagination. 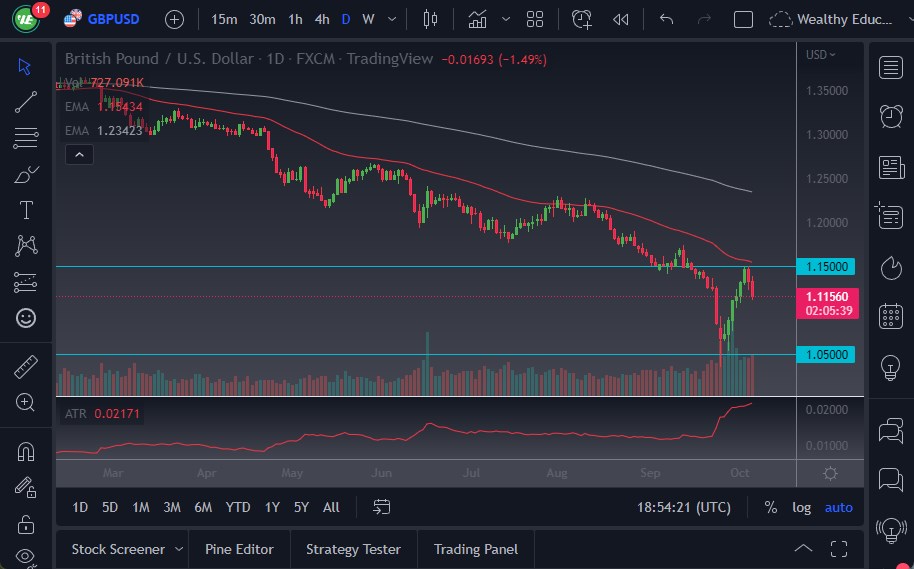 Ready to trade our Forex forecast? Here’s a list of some of the best Forex trading platforms to check out.