I would not be surprised at all to see the NASDAQ 100 hit the 10,000 region given enough time.

Picking bottoms can be a very stinky business, but unfortunately there will be plenty out there that are trying to do it. Even if we rally from here, it’s likely that we will see quite a bit of resistance above, if nowhere else than the 12,000 level. When you look at the rally from this past summer, you can see how relentless it was, but we rolled over right at about the 200-Day EMA. That was under the delusion that the Federal Reserve was going to change its monetary policy. However, the Federal Reserve has finally convince people that it is going to continue to tighten monetary policy, even if it’s about a year and ½ too late. The one thing you can count on from the Federal Reserve is that they will always do the wrong thing at the wrong time.

Looking at a breakdown below the recent swing low, opens up the possibility of a drop down to the 11,000 level. Any rally at this point in time will have to deal with a multitude of issues, not the least of which is tightening monetary policy and rising rates. Remember, a lot of the NASDAQ 100 is considered to be “high-growth”, and therefore it needs cheap money. Cheap money is a thing of the past, and is not coming back in the foreseeable future.

The bubble of everything that we are now in is finally coming undone, and we are starting to see that show up everywhere. Everything was over levered, everything was overbought. In this scenario, I would prefer to be on the short side, even though I recognize that I would get stopped out occasionally because of the random bear market bounce. Until the fundamentals change, there’s no reason to think that rallies are anything other than a head fake. Ultimately, I do think that we are going to head to the 11,000 level and beyond. I would not be surprised at all to see the NASDAQ 100 hit the 10,000 region given enough time. 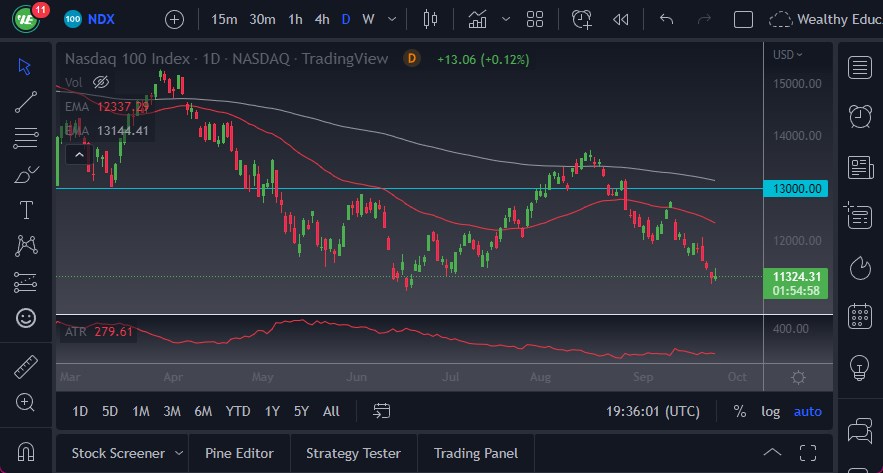 Ready to trade the NASDAQ 100 Index? We’ve made a list of the best online CFD trading brokers worth trading with.

How to Stay Sane During a Crypto Crash

Oil is trading higher after the weekend news

The Race To Save Sam Bankman-Fried’s Other Crypto Exchange