Spot natural gas prices rose in the recent trading at the intraday levels, to achieve new daily gains until the moment of writing this report, by 1.12%. It settled at the price of $8,399 per million British thermal units, after rising sharply during yesterday’s trading by It reached 4.93%.

Freeport’s removal of force majeure in the wake of the June accident at the liquefied natural gas (LNG) facility helped lift the Nymex gas futures contract for September by 36.9 cents to $8,202/MMBtu. While the October futures contract jumped by 36.8 cents to $8.193.

With cold weather starting in some key US regions before milder temperatures are more prevalent later this month, there is likely to be some price dip in the middle of the week based on the latest weather models, both US and European models headed for the cooler trend .

Meanwhile, wholesale gas prices rose in the Netherlands and Britain on Thursday morning due to concerns about finding alternative supplies for Russian gas before winter, maintenance outages and reduced wind production.

Eastbound gas flows through the Yamal-Europe pipeline to Poland from Germany were steady on Thursday, data showed, as were flows through Nord Stream 1 from Russia, which cut the pipeline to 20% of capacity, citing maintenance work.

Separately looking at the weekly US Energy Information Administration (EIA) inventory report due later Thursday, it is estimated that storage was accumulating near 40 billion cubic feet for the week ending August 5.

Technically, natural gas succeeded in restoring stability above the resistance level 8.054, in light of the dominance of the main bullish trend in the medium and short term along a slope line. This is shown in the attached chart for a (daily) period, with the positive pressure continuing to trade above its simple moving average for a period of 50 previous days.

We notice the start of positive signals on the RSIs, after reaching oversold areas, in an exaggerated way compared to the price movement, to start forming what is known as positive divergence and adding more bullish momentum to its next movement.

Therefore, our expectations indicate more rise for natural gas during its upcoming trading, as long as it stabilizes above 8.054, to target the pivotal resistance level 9.600. 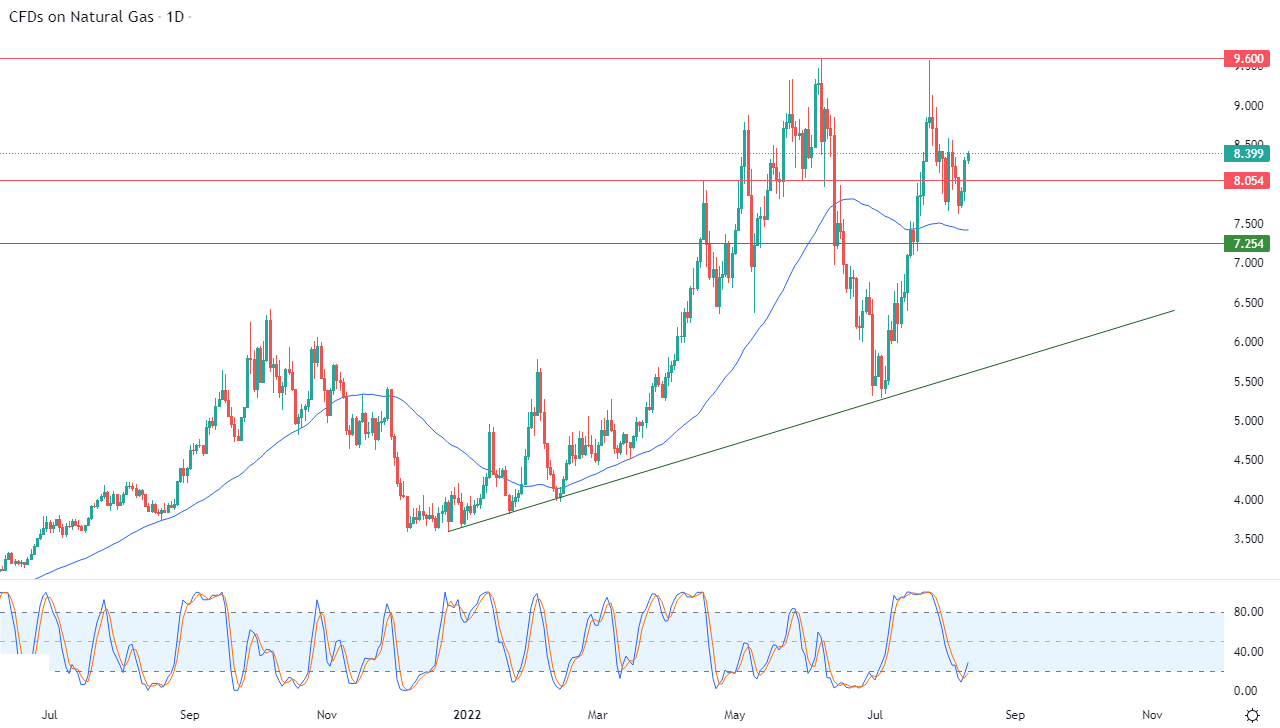 Ready to trade Natural Gas Forex? We’ve made a list of the best commodity trading brokers worth trading with