We expect natural gas to decline during its upcoming trading.

Spot natural gas prices (CFDS ON NATURAL GAS) rose in their recent trading at the intraday levels, to achieve daily gains until the moment of writing this report, by 3.73%, after falling in yesterday’s trading by -7.03%.

Natural gas futures fell on Tuesday to extend the sell-off seen in the previous week. Prices were affected by the mid-July delay from hot weather patterns in the US and expectations of another strong inventory reading.

In a report published on Tuesday, the Paris-based International Energy Agency projected that global demand for natural gas would rise by 140 billion cubic meters between 2021 and 2025. This is less than half the increase of 370 billion cubic meters seen in the previous five-year period. , which included the period of the epidemiological downturn.

The revised forecast is mostly due to expectations of slower economic growth rather than buyers switching from gas to coal, oil or renewable energy. While gas flaring emits less carbon dioxide than other fossil fuels, the methane released during the extraction process is an important driver of climate change.

The International Energy Agency said that the efforts of EU countries to break away from Russian gas will lead to a 55-75% decrease in pipeline exports from Russia to the 27-nation bloc. Meanwhile, EU purchases of LNG have shifted deliveries to other regions such as Asia, which are expected to account for half of demand growth by 2025.

The agency attributed the rise in natural gas prices to supply concerns about the war in Ukraine, which will slow the growth of demand for fossil fuels in the coming years.

Technically, the price is trying in its early trading for today to compensate for part of what it incurred from previous losses, supported by the influx of positive signals in the RSI indicators, but the dominant trend remains the short-term corrective bearish trend along a slope line, with the negative pressure continuing for its trades below the moving average. Simple for the previous 50 days, as shown in the attached chart for a (daily) time period.

Therefore, we expect natural gas to decline during its upcoming trading, especially in the event of its trading stability below the 5.615 level, to target the support level 4.742. 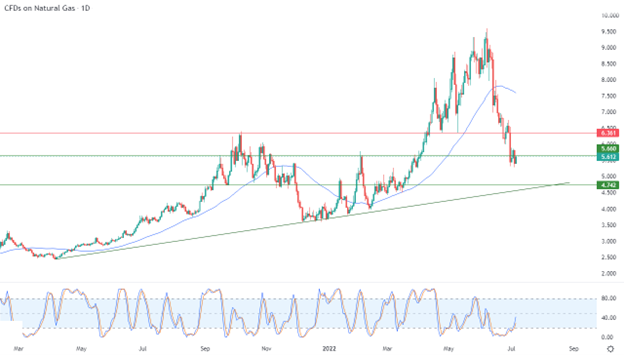