The USD/INR has maintained a rather polite price range the past handful of days, but it has provided traders an opportunity to take advantage of support and resistance levels.

The rupee has been extremely popular lately – don’t miss these interesting opportunities!

The USD/INR on first glance of a five-day chart looks like it has maintained a rather steady price range the past handful of days. Yet when taking a second or third look, it is quite evident the USD/INR has traversed a rather steady test of support and resistance levels also which offer the ability to trade perceived boundaries.

The past few days of trading have seen the USD/INR incrementally rise. However, the Forex pair remains under the 74.50000 resistance mark and until it punctures this level higher, traders may be inclined to believe that the nearby higher ratio is an opportunity to ignite selling positions.

The consolidated value realm of the USD/INR may entice traders with patience and who use a conservative amount of leverage the ability to test momentum. While the USD/INR has higher support levels which have been demonstrated since the 18th of November, resistance up until now has remained steady and has not gone higher than 74.43000 last seen on the 17th.

Bullish traders cannot be faulted for looking at close resistance as vulnerable and if the 74.44000 mark were to be punctured higher, speculative take profit targets near the 74.46000 to 74.49000 values could prove worthwhile. If the USD/INR does challenge higher prices and continues to incrementally raise support levels, this could signal a higher realm for the Forex pair may develop near term.

However, until resistance levels are punctured higher, some traders may be tempted to believe the USD/INR will move lower again. If the crucial 74.44000 to 74.45000 prices are sustained and not penetrated higher, reversals lower can be sought. Traders should keep in mind the markets could grow volatile towards the end of this coming week as financial institutions decrease the amount of their transactions, because of the Thanksgiving holiday in the States on Thursday.

Technically, the USD/INR is intriguing because of the rather familiar value range it has practiced the past handful of days. Traders will have their perceptions tested and if the USD/INR is able to sustain current resistance levels there may be reason to suspect a lower move can be exhibited. But until a support or resistance level is proven weak, speculating on the range with quick hitting entry prices and designated take profit and stop loss orders will likely be the cautious and correct approach. 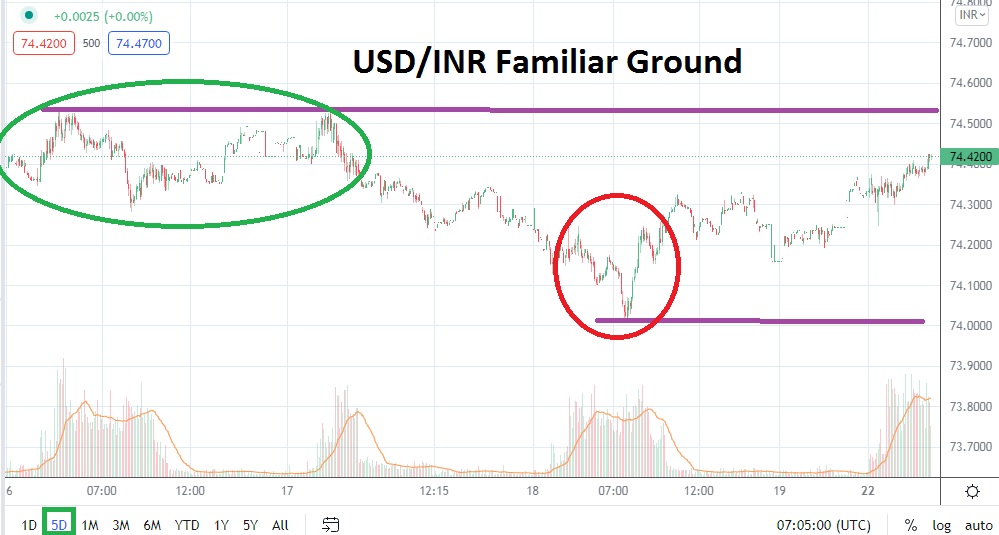 Whipsaws Ahead of US PCE Data