Speculative Flavor of the Past Year May Be Souring

SHIB/USD has suffered a strong selloff like many of its major cryptocurrency counterparts the past week of trading and important lows are being challenged.

SHIB/USD has lost substantial value the past week of trading. An early morning low yesterday took SHIB/USD to nearly the 0.00001335 mark briefly; this value had not been sincerely traded since the first week of October 2021. Selling in SHIB/USD has been strong since the cryptocurrency hit a mark of nearly 0.00003000 on the 12th of April.

Shiba Inu in many respects has been at the forefront of cryptocurrency speculation the past year and its time in the sun is certainly not over. However SHIB/USD has certainly seen a lot of its shine start to diminish since late October of 2021, when Shiba Inu attained a high price of nearly 0.00008812. Intriguingly the apex price of SHIB/USD occurred a few days before Bitcoin hit its record value in early November, this before the broad cryptocurrency market turned bearish.

The belief that SHIB/USD is a barometer of risk appetite in the cryptocurrency world does have merit. The inability of SHIB/USD to spur on a consistent reversal upwards as it suffers within a long term bearish trend should be considered by traders. The fact that Shiba Inu is known as speculative cryptocurrency with no utilitarian purpose cannot be overstated. SHIB/USD acts as a place for speculators to wager on behavioral sentiment within the cryptocurrency trading landscape.

As SHIB/USD continues to linger near important lows and shows little in the way of ability to lift itself higher, concerns may be growing among its speculators who may have a sour taste in their mouths. Short term traders of SHIB/USD may find that they are in a more comfortable spot compared to long term speculators of Shiba Inu. This is because day traders can afford to follow its momentum lower if they choose to pursue short positions. Long term speculators of SHIB/USD are mostly buyers of the cryptocurrency, and hoping Shiba Inu can regain some of its luster as a speculative digital asset which people will feel compelled to buy.

However as nervous sentiment shadows the broad cryptocurrency market and riskier assets are being sold, SHIB/USD has suffered a strong downturn. Traders cannot be blamed for believing SHIB/USD has additional room to traverse lower. Traders should use entry price orders while placing their bets on the direction of Shiba Inu to make sure their fills meet their expectations. If SHIB/USD falls below the 0.00001565 level it may begin to falter with a stronger move downwards. 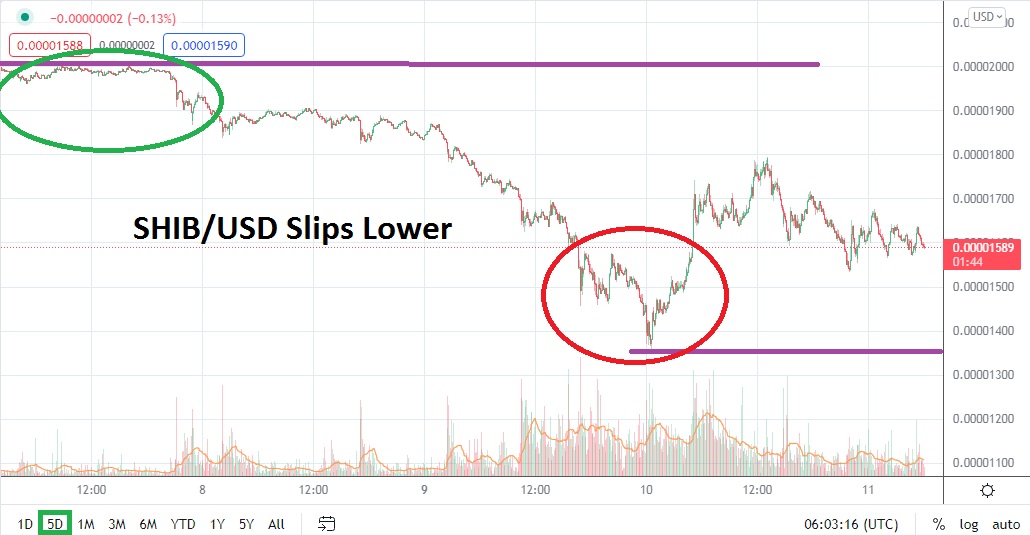 Global Inflation Will Peak In The IV Quarter Of 2021

FTX to Expand Into Stock Trading