The stage could be setting up for a sharp rally

The lawsuit between the Securities and Exchange Commission (SEC) in the United States and Ripple to determine whether Ripple’s XRP sales violated US securities laws has been ongoing since December 2020. The uncertainty of the outcome has been a major overhang on XRP’s price – but that could soon end. Both the SEC and Ripple in their motions called on US District Judge Analisa Torres of the Southern District of New York to make an immediate ruling in the case. With markets expecting a quick resolution, the XRP token has been attempting to rise above its immediate resistance of $0.41 as of 21 September 2022.

Ripple’s general counsel, Stuart Alderoty, tweeted on 18 September that the SEC has been “unable to identify any contract for investment” even after two years of litigation. He added that the regulator could not “satisfy a single prong of the Supreme Court’s Howey test.”

My hot take – after two years of litigation, the SEC is unable to identify any contract for investment (that’s what the statute requires); and cannot satisfy a single prong of the Supreme Court’s Howey test. Everything else is just noise.

The Howey test was created by the Supreme Court to determine whether certain transactions qualify as “investment contracts.” If so, those transactions are considered as securities and therefore subject to certain disclosure and registration requirements under the Securities Act of 1933 and the Securities Exchange Act of 1934.

In a separate tweet, attorney Jeremy Hogan said that the “SEC has got a couple big problems.” He went on to explain that the regulator’s experts had conceded that XRP’s price was determined by market forces and not Ripple and such concessions were “perfect for summary judgement.” Another problem was that the “SEC failed to get on record that any XRP purchaser heard Ripple’s alleged marketing pitch.”

I just read the briefs and the SEC has got a couple big problems:

1. Its expert agrees that most of the changes in XRP price are due to market forces (and not Ripple). Ouch.

These types of concessions are perfect for summary judgment. 1/2 https://t.co/Hvs2p2j8D5 pic.twitter.com/lt9u1BX4pI

However, in its filing, the SEC said that “Ripple publicly touted the various steps it was taking and would take to find a ‘use’ for XRP and to protect the integrity and liquidity of the XRP markets.”

Will XRP go up in anticipation of a favourable judgement for Ripple? Read the XRP price analysis to find out what the charts suggest. 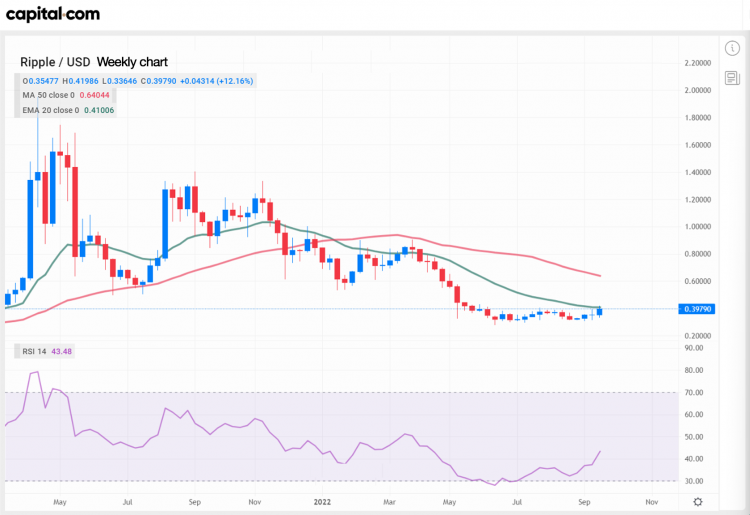 XRP’s price is attempting a recovery and has reached the 20-week exponential moving average (EMA). This is an important level to keep an eye on because a break and close above it will be the first indication that the bears may be losing their grip.

If the price sustains above the 20-week EMA, the XRP/USD pair could attempt a rally to the 50-week simple moving average (SMA). This level may act as a strong resistance but if bulls clear this hurdle, the rally could extend to $1.

Although the relative strength index (RSI) is still in the negative territory, its strong rise shows that the bullish momentum could be picking up.

This positive bias could be invalidated if XRP’s price turns down from the 20-week EMA and plummets below $0.28. Such a move could signal the resumption of the downtrend.

What is your sentiment on XRP/USD?

Give XRP/USD a try

XRP’s price has been stuck inside a range between $0.30 and $0.41 for the past several days. Buyers attempted to clear the overhead hurdle on 20 September but the bears held their ground. This shows that the bears continue to defend the $0.41 level aggressively.

But if the XRP/USD pair does not give up much ground from the current level, it will suggest that traders are not closing their positions near the resistance as they anticipate a breakout.

If the price breaks and closes above the range, the pair could attempt a rally to the pattern target of $0.52.

Conversely, if the price turns down and breaks below the moving averages, it will suggest that the range-bound action may continue for a few more days.

Ripple is attempting to break out from its range. If buyers push the price above the overhead resistance, Ripple’s price analysis suggests a rally to $0.52 and thereafter to $0.64. This bullish view could be negated in the short term if the price turns down and breaks below $0.35.

The views and opinions expressed in the article are those of the author and do not constitute trading advice. Trading and investing involve substantial risks and you should do your own research or contact your financial adviser before arriving at a decision.

Will not tolerate fragmentation that would impair transmission of monetary policy

EUR/USD Retreats Below 1.05 After ISM Manufacturing Falls in Contraction