Today’s recommendation on the lira against the dollar

– None of the buying or selling transactions of yesterday were activated.

Entering a long position with a pending order from 14.51 levels

– Move the stop loss to the entry area and continue to profit as the price moves by 50 pips.

Entering a short position with a pending order from 14.77 levels.

– The best points for setting stop-loss are closing the highest levels of 14.90.

– Move the stop loss to the entry area and continue to profit as the price moves by 50 pips.

The Turkish lira’s trading has stabilized during today’s trading, to complement its stability during yesterday’s trading, after the strong rises recorded by the Turkish currency against the US dollar on Tuesday, as the effective dollar of the Turkish administration in the Russian-Ukrainian negotiations contributed to pushing the price of the lira. These efforts did not produce much, as Turkish Foreign Minister Mevlut Cavusoglu said, on Thursday, that the agreements reached between Ukraine and Russia during the Istanbul negotiations have not been achieved at the practical level. Speaking to the press, the top diplomat in Ankara announced that Turkey would strive to bring the warring parties’ foreign ministers back to the negotiating table. In terms of data, reports from the Turkish Statistical Office showed that the economic confidence index declined to 95.7, compared to 98.2 points. It is negative data that contributed to putting pressure on the price of the lira.

On the technical level, the Turkish lira traded against the dollar during the early trading, to continue within the same framework that it stabilized inside since yesterday. The lira rose after its stability for two weeks against the US dollar within a narrow range on the 240-minute time frame shown through the rectangle on the chart. The pair varied around the 50, 100 and 200 moving averages, respectively, on the four-hour time frame, as well as the 60-minute time frame. The pair is trading the highest levels of support, which are concentrated at 14.51 and 14.43 levels, respectively. On the other hand, the lira is trading below the resistance levels at 14.77 and 14.85, respectively. We expect the pair to return to decline from the resistance levels of 14.77. Please adhere to the numbers in the recommendation with the need to maintain capital management. 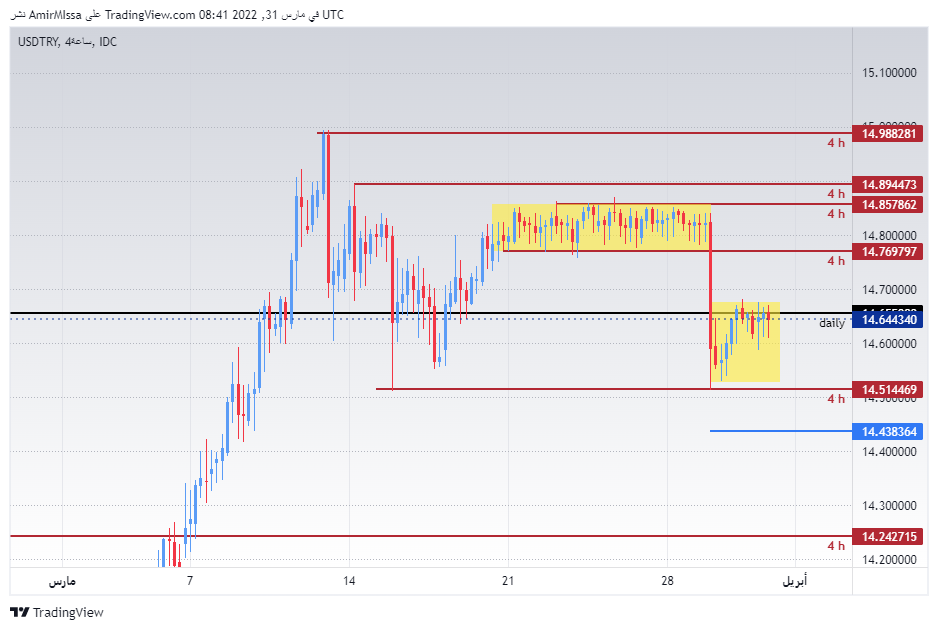 As Government Takes on the Tornado Mixer, It May Reap a Whirlwind