Any drop in the pair represents an opportunity to buy back again.

Today’s recommendation on the TRY/USD

The TRY/USD recorded stability during morning trading today, Tuesday. Investors followed a number of decisions launched by the country’s president, Recep Tayyip Erdogan, after a cabinet meeting, most of which were characterized by the support of Turkish citizens, while the opposition said that the Turkish president’s decisions aim to increase the popularity of the ruling party before the elections that Erdogan wants to present on its original date.

The most prominent decisions of the Turkish president included exempting Turkish citizens from tax debts until the end of 2022, which are less than 2,000 Turkish liras. Erdogan also issued another decision to remove traffic waste for citizens, except for driving under the influence of alcohol and drugs, as well as violations that caused accidents or deaths. In addition to some other political decisions, related to elections or Sweden’s accession to NATO.

It is noteworthy that the World Bank had previously issued a warning of an increase in government spending by the ruling party prior to the election period to support Erdogan and his party during the elections. The country suffers from a high inflation rate, despite the significant improvement in the inflation rate during the recent data for the month of December when it was recorded Inflation is 64%, compared to approximately 85% recorded in November.

On the technical front, without any change, the trading of the dollar pair against the Turkish lira almost stabilized during today’s early trading. The pair witnessed slight movements near its all-time highs, the pair continued to trade within the levels of the ascending channel on today’s time frame, which reflects the upward movement of the pair, albeit at a slow pace. At the same time, the dollar pair against the lira is trading above the moving averages 50, 100, and 200 on the daily time frame as well as on the four-hour time frame, in a sign of the general bullish trend for the pair.

Currently, USD/TRY is trading above the support levels of 18.70, 18.60, and 18.53, respectively. On the other hand, the pair is trading below the resistance levels at 18.83 and 18.86, which represents the highest price for the pair ever, and the pair is also trading below the psychological resistance levels at 19.00. Any drop in the pair represents an opportunity to buy back again. Please adhere to the numbers in the recommendation, while maintaining capital management. 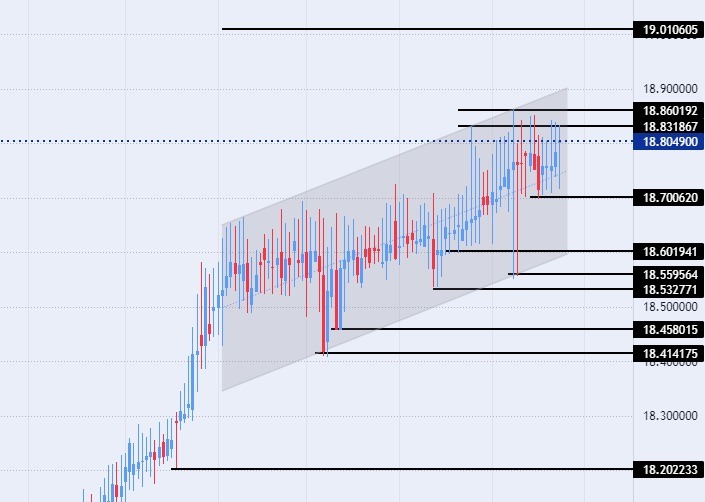 Ready to trade our Forex daily analysis and predictions? Here are the best Forex brokers to choose from.