Prices are rising at nearly the fastest pace in 40 years, giving Congressional Republicans a hammer to use against Democrats in the fall congressional elections.

Last week’s trading was important for the bulls to gain more control over the general trend of the USD/JPY currency pair. The pair breached the historical psychological resistance level of 140.00 and reached the resistance level of 140.80, the highest for the currency pair in 24 years. Amid this performance, in which the bulls are outperforming, investors and markets are waiting for Japanese intervention to prevent further collapse of the Japanese currency. The US dollar is still the strongest in the expectations of raising US interest rates, as well as the results of the recent US economic data were supportive of this trend. With it the markets ruled out the possibility of US economic stagnation in conjunction with the policy of the US Federal Reserve

On the economic side, US employers added a good number of jobs last month. However, they have slowed to hire them enough to help the Federal Reserve in its fight to curb hyperinflation. The US economy gained 315,000 jobs in August, a still solid figure indicating an economy that remains resilient despite high interest rates, high inflation and slowing consumer spending. Friday’s report from the government also showed that the US unemployment rate rose to 3.7%, up from a half-century low of 3.5%. However, this increase was also an encouraging sign. It reflected a long-awaited rise in the number of Americans looking for work.

Prices are rising at nearly the fastest pace in 40 years, giving Congressional Republicans a hammer to use against Democrats in the fall congressional elections. In this regard, Texas Republican Representative Kevin Brady indicated on Friday that wage increases are not keeping pace with inflation, leaving Americans “with their salaries shrinking.”

The White House backed down, claiming credit for what it calls evidence that the economy remains flat. For his part, US President Joe Biden said on Friday that “Jobs are up, wages are up, people are back to work, and we’re seeing some indications that inflation may be, perhaps … is beginning to decline.”

The US inflation rate fell to an annual rate of 8.5% in July from 9.1% in June, mostly as gas prices fell steadily. Prices at the pump fell to $3.81 a gallon on Friday from $5.02 in mid-June. But inflation has fallen in the past only to jump higher again, and few economists are willing to announce that it has peaked.

US employment gains in August fell from 526,000 jobs added in July and fell to less than the average increase in the previous three months. Wage growth weakened a bit last month as well, which may also serve the Fed’s inflation fight. Average hourly wages rose 0.3% from the previous month, the smallest gain since April. Companies usually pass on the higher wage cost to their customers through higher prices, which leads to higher inflation.

In the long term, and according to the performance on the daily chart, it appears that the USD/JPY is trading within the formation of a sharp bullish channel. After the recent gains, the technical indicators have reached overbought levels and anticipate a profit-taking sale at any time. This performance indicates a strong long-term bullish bias in market sentiment. Therefore, the bulls will target long-term profits at around 142.05 or higher at the 143.97 resistance. On the other hand, bears will look to pounce on profits at around the 138.21 support or lower at the 136.18 support. 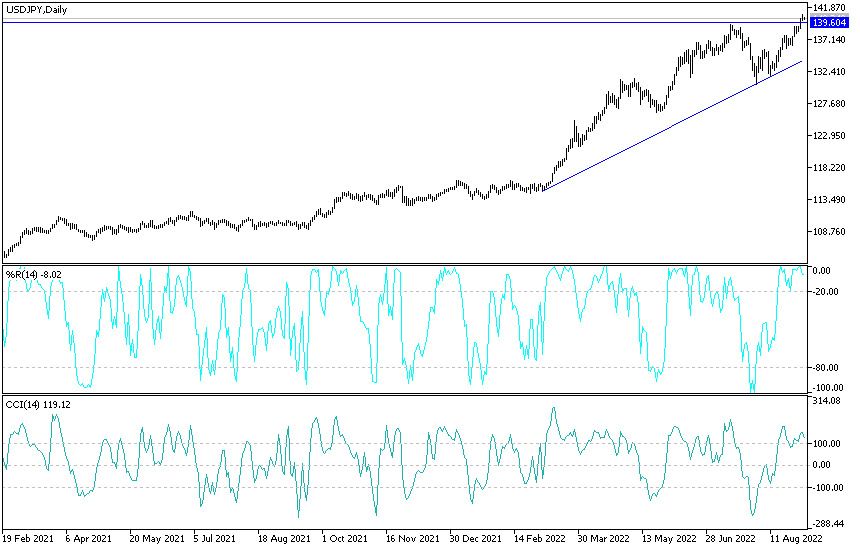 Ready to trade our Forex trading predictions? Here are some excellent Forex brokers to choose from.

Ethereum’s Second-Layer Projects Duke It Out for Dominance