USDJPY is currently trading around its red Tenkan-sen line around 122.00 after retracing below the 122.57 level, which is the 23.6% Fibonacci retracement of the up leg from the 114.40 low until the recorded 125.10 rally peak. The rising simple moving averages (SMAs) continue to endorse the prevailing ascent despite the fresh correction in the pair.

For now, the Ichimoku lines indicate that bullish forces have yet to fully abate, while the short-term oscillators suggest that positive momentum is subsiding. The MACD, which is very far in the bullish region, is waning towards its red trigger line, while the RSI has turned bearish with its fresh drop below the 70 overbought level. Moreover, the negatively charged stochastic oscillator is promoting additional downward moves in the pair.

Otherwise, if buyers re-emerge and push higher from the vicinity of the red Tenkan-sen line, prompt resistance could arise from the 23.6% Fibo of 122.57. Gaining additional legs above this border, the bulls may then eye the 125.10-125.98 resistance section, shaped by the June, October and December 2002 peaks. Nonetheless, once renewing the bullish impetus of the broader uptrend, the bulls would also need to overrun the neighbouring 126.38-126.83 resistance band to open the way for a test of the 129.00 handle, overlapping the next resistance high.

Summarizing, USDJPY’s upside risks prevail despite the softening to a degree of the pair’s bullish bearing. A deeper bearish correction below the 118.17-118.66 support border could spark worries about growing negative tendencies. 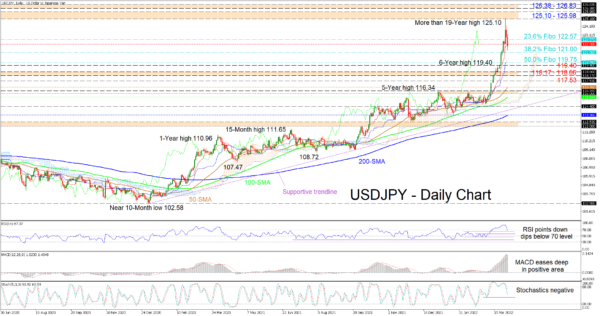 Waves price surges 39%, a huge rise for the Ukrainian made crypto