Who Owns The Most Celsius?

by Source in article
in Celsius
0

During the Covid-19 pandemic, crypto lending protocols such as Celsius Network (CEL) proliferated, attracting lenders with high-interest rates and borrowers with fast access to loans.

However, the Celsius business model crumbled after a significant selloff in the cryptocurrency market triggered by the collapse of LUNA-UST in May 2022.

As the market felt the repercussions of the LUNA-UST crash, many investors attempted to withdraw their funds from Celsius, adversely affecting the price of the CEL token.

As a result, Celsius announced the suspension of withdrawals and transfers on 13 June, leaving hundreds of thousands of retail investors without access to their savings. In addition, Celsius had significant exposure to the troubled crypto hedge firm Three Arrows Capital, which later became insolvent.

Before delving deeper into the specifics, let’s address the question of who owns the most Celsius tokens. In addition, we will examine CEL’s tokenomics and other elements to determine potential future paths for the token.

What is Celsius Token?

Alex Mashinsky and Daniel Leon founded Celsius in 2017. The Celsius Network is a decentralised finance (DeFi) lending platform that allows users to earn interest on deposited cryptocurrencies or get crypto-collateralized loans.

Celsius employs a redesigned proof-of-stake (PoS) algorithm and attracts users by offering significant returns on their deposits while preserving the advantages of conventional banks, such as fast, low-fee transactions.

Celsius is a for-profit venture that retains a share of interest payment profits while giving back the majority (80%) to its customers. The firm also services hedge funds and other institutional borrowers.

Asset-backed loans guarantee repayment by requiring borrowers to put up collateral equal to or more than the amount they borrow, converted to the local currency.

What is your sentiment on CEL/USD?

Give CEL/USD a try

The current state of Celsius Network

On 15 August, despite all the controversy surrounding the platform, the CEL token price reached a 90-day high of $4.46, according to CoinMarketCap. CEL was trading at $0.97, as of 12 October, down more than 78% from its August peak.

In July, Celsius revealed that the company had voluntarily filed for Chapter 11 bankruptcy. This section of the Bankruptcy Code governs reorganisation, which often involves a company or partnership.

Typically, a chapter 11 debtor presents a plan of reorganisation to keep its firm afloat and pay back creditors over time, so there is still hope for Celsius.

Additionally, Celsius said it had $167 million in cash, which could offer sufficient liquidity to maintain some activities throughout the reorganisation process.

In addition, according to a report by Reuters, Chief US Bankruptcy Court judge Martin Glenn decided in New York City that Celsius could sell its bitcoin (BTC) for additional liquidity.

The court decided to accept the strategic discretion of the organisation. However, Glenn barred Celsius from selling stock or debt stakes in other cryptocurrency startups.

Amid all this turmoil, Celsius Network made an unexpected announcement at the end of September that Mashinsky would be stepping down as CEO, with former JP Morgan finance officer Chris Ferraro becoming interim CEO.

According to Celsius Net Worth, a statistical tool based on Celsius data, several investors have lost substantial amounts over this period, with some of the biggest Celsius holders losing millions. 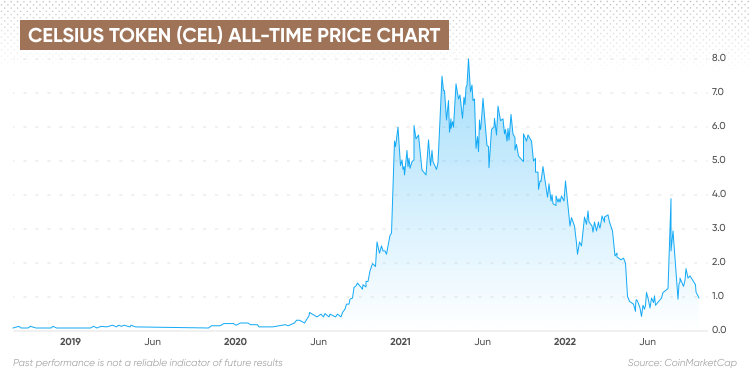 Like other cryptocurrencies, Celsius token’s supply is hard-capped, suggesting that there will be a maximum supply of 695.65 million tokens, according to CoinMarketCap. CEL currently has a circulating supply of 238.86 million tokens.

In addition, 27% of the token supply was assigned to the treasury, 19% to the team members, and 2% each to partners and advisers.

Who owns the most Celsius tokens?

According to CoinCarp statistics, there were 31,986 Celsius holders, as of 12 October, down from 32,414 on 13 September. More detailed analysis indicated that the top 10 holders owned more than 92% of the CEL supply, and the top 100 holders controlled 98.55% of the CEL supply, making the token extremely vulnerable to pump and dump schemes.

Celsius Network was among the top holders of Celsius, with more than 26.61% of the supply, equivalent to 184.34 million tokens.

Celsius Network also held tokens in other wallets, raising its total to 264.86 million tokens or 38.23% of the entire supply, suggesting that the founding team, staff, and all other stakeholders are still strongly involved.

Among other biggest Celsius holders, FTX (FTT), one of the largest cryptocurrency exchanges, had 4.59 million tokens, or around 0.66% of the overall supply. Another exchange named OKEx held 2.31 million tokens, or 0.33% of CEL supply.

Polygon (MATIC), one of the prominent cryptocurrency protocols, also held 3.06 million CEL coins or 0.44% of the total supply.

The names and other data about who has the most Celsius are not publicly accessible, as crypto wallets are essentially anonymous. Moreover, as a single user may maintain multiple anonymous wallets, hence, this data cannot be used to infer the top CEL token holders.

Wallets linked to former Celsius Network CEO Alex Mashinsky have transferred almost $1m in CEL and USDC to Uniswap (UNI) and MetaMask since the beginning of October of 2022, according to data provided by Nansen, a blockchain analytics company.

Meanwhile, the U.S. Bankruptcy Judge Glenn, who is supervising the case, ordered an independent examiner to provide a report documenting Celsius’ financial management and client account handling by mid-November. This report will provide the timeline for when consumers may withdraw their assets.

In light of inflation worries, a stagnant market and the approaching court ruling, the outlook for Celsius Network and its stakeholders is now bleak. However, it is currently impossible to know what the future holds.

While it is essential to understand these CEL facts, they should not substitute your own research. Remember that cryptocurrency markets are very volatile.

Before trading, always complete your own due diligence by researching the latest news, fundamental and technical analysis, and a broad range of analysts’ opinions.

Keep in mind that past performance is not a reliable indicator of future results. And never trade with money you can’t afford to lose.

There are currently no responses for this story.
Be the first to respond.

Stocks surge, altcoins give back their gains and dollar strength may push Bitcoin lower

Binance Is Organizing a Consortium to Try to Rebuild Trust in Crypto: Source