Yen Outperforms on Falling US Yields, Focus Turns to NFP

Yen is apparently the biggest winner against the broadly pressured Dollar. Steep declines in US and European benchmark yield gave the Japanese currency much support. Euro is currently the better performer among European majors. Canadian Dollar clearly lags behind other commodity currencies. The greenback will now look into this non-farm payroll data today, which might not carry as much significance as earlier anticipated. 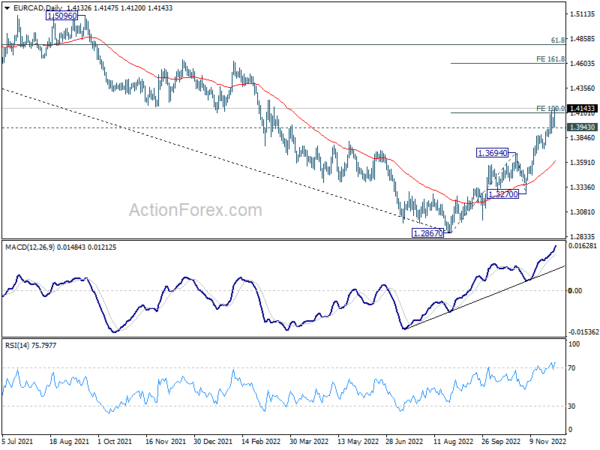 BoJ board member Naoki Tamura told Asahi daily that a review of monetary framework should be conducted by the central bank. Such review could come “soon or at a somewhat later date”. “Whether the BOJ needs to tweak its monetary policy will depend on the outcome of the review,” he said.

Tamura also noted there was scope to review the feasibility of the 2% target, and consider it as a more flexible goal. “As long as the economy is achieving a virtuous cycle, I think it’s okay even if inflation is at, say 1.8%” instead of 2%,” he noted.

New York Fed President John Williams said yesterday in an interview that slowing the pace of rate hikes in December would simply mean “stepping down one step” in the effort to curb inflation.

“I still think we have a ways to go in terms of where the fed funds target is and where we need to get it to next year in order to get the sufficiently restrictive stance,” he said.

“Inflation, first of all, is the number one problem we’re facing in terms of monetary policy. It is far too high,” Williams said. And, bring inflation back to 2% target will “take a good couple of years”.

But he added: “I expect to see a pretty significant decline in inflation next year as supply chain issues improve, as we see the slowing economy, the economy getting into better balance.”

US non-farm payroll report is a major focus for today. Markets are expecting 200k job growth in the US in November. Unemployment rate is expected to be unchanged at 3.7%. Average hourly earnings is expected to rise 0.3% mom.

The significance of today’s set of data might not be as high as earlier expected, after Fed Chair Jerome Powell’s speech two days ago. Powell clearly indicated that it “makes sense” to start slowing the pace of rate hikes, as soon as this month. That is, a 50bps hike is pretty much a done deal.

What matter now are the terminal rate of the tightening cycle, and the time to stay there. A month’s job data shouldn’t alter the expectations on these two issues much.

A key development to note is the surprised steep decline in 10-year yield overnight. The move away from 55 day EMA is clearly a bearish sign. But 3.483 might provide at least some interim support. Let’s see today’s NFP would trigger a recovery in TNX. If that happens, USD/JPY could also follow for a recovery. 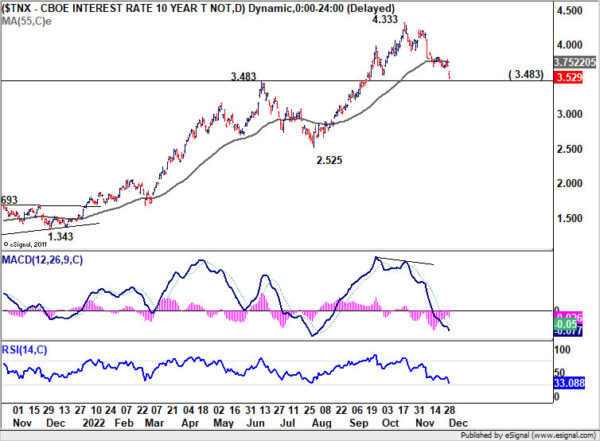 Germany trade balance and Eurozone PPI will be released in European session. In addition to US non-farm payroll, Canada will also release employment data.

Intraday bias in USD/JPY remains on the downside as fall from 151.94 is in progress. Next target is 133.07 medium term fibonacci level. Some support could be seen there to bring recovery. Break of 137.66 support turned resistance will turn intraday bias neutral first. However, near term risk will stay on the downside as long as 142.24 resistance holds, even in case of recovery. 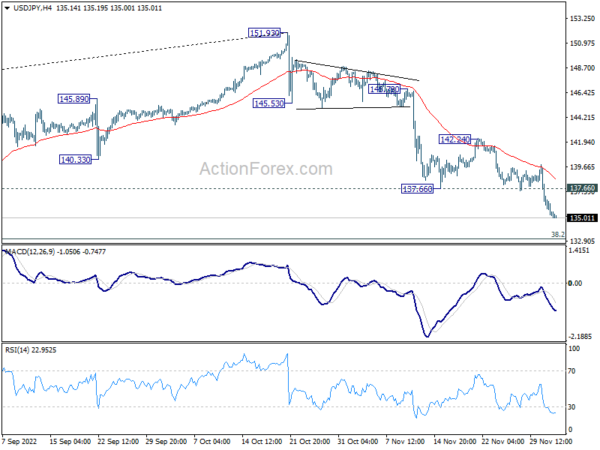 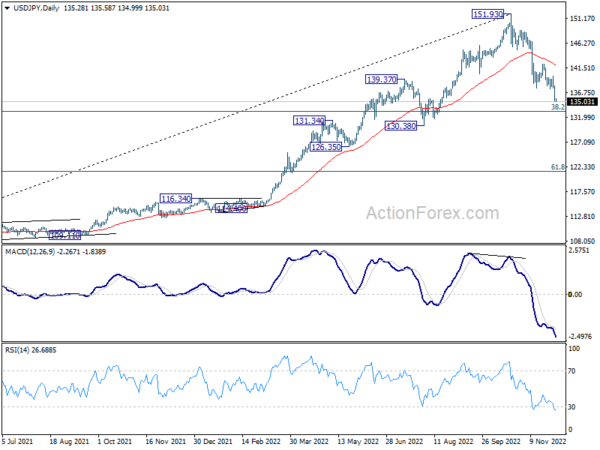